VivaJava: The Coffee Game: The Dice Game – Game of the Year Expansion

The Game of the Year Expansion is a set of two expansions originally available to backers through Kickstarter but which will be later released for general purchase. It includes The Anger Expansion and the Dice Hate Me Signature Series.

The Anger Expansion:
The core VivaJava Dice game is designed with positive player interaction and neutral conflict to provide a thoughtful and relaxing atmosphere for a large variety of gamers. The Anger Expansion does exactly the opposite – it’s filled with a lot of sneaky moves, game-changing abilities and “take that” mechanics. It’s a total blast to play, but it’s not for the thin-skinned.

The 11 new abilities can be individually added to the WILD Coaster from the base game to spice things up. Or players may use the included Anger Management Disc and Anger Coaster combination to create a quick mix of new abilities to explore.

(A set of 4 Angry Dice, originally included with this package, is needed for one of the abilities.)

The Dice Hate Me Signature Series:
The Dice Hate Me Signature Series is an elegant set of miniature games that can be added to the base game of VivaJava Dice and is fully compatible with the Anger Expansion. Five excellent Dice Hate Me Games titles are represented in the mix (Brew Crafters, Compounded, Belle of the Ball, Carnival, and The Great Heartland Hauling Co.) and each comes with an ability disc and Coaster combination that are added to the WILD Coaster from the base game.

While the Anger Expansion is focused on adding more player interaction and wilder ability combinations, The Dice Hate Me Signatures Series focuses again on expanding the game with meaningful and alternate ways to score points and move forward toward victory. Each of the Coasters takes thematic and mechanical cues from the represented games, and will be nostalgic to those familiar with the other Dice Hate Me titles. 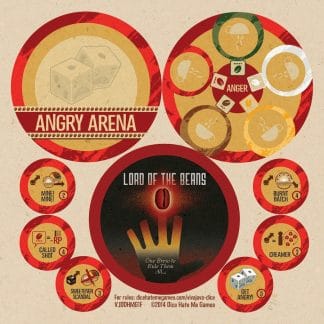